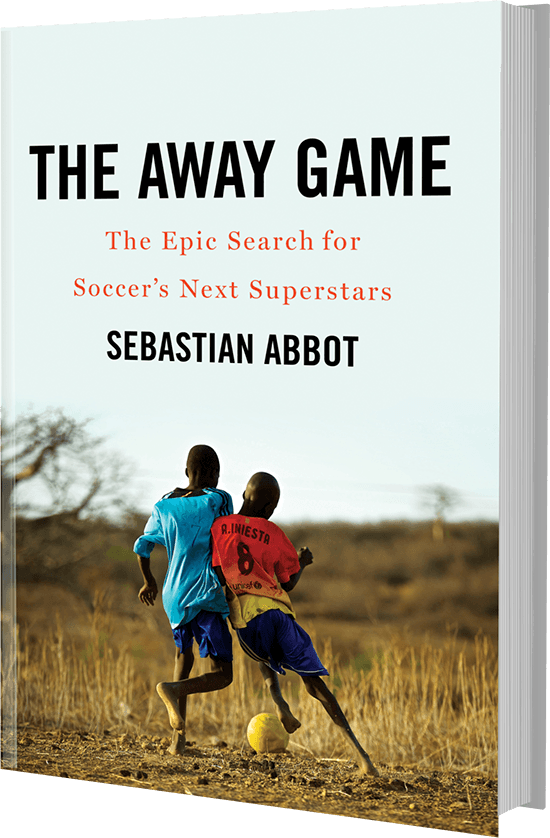 Over the past decade, an audacious program called Football Dreams has held tryouts for millions of 13-year-old boys across Africa looking for soccer’s next superstars. Led by the Spanish scout who helped launch Lionel Messi’s career at Barcelona and funded by the desert kingdom of Qatar, the program has chosen a handful of boys each year to train to become professionals — a process over a thousand times more selective than getting into Harvard.

In The Away Game, reporter Sebastian Abbot follows a small group of the boys as they are discovered on dirt fields across Africa, join the glittering academy in Doha where they train, and compete for the chance to gain fame and fortune at Europe’s top clubs. We meet Diawandou, a skilled Senegalese defender whose composure makes him a natural leader on the field; Hamza, a midfielder from Ghana with great talent but a mercurial personality to match; Ibrahima, a towering striker who scores goals by the bucketload; Serigne Mbaye, who glides by players effortlessly but happens to be deaf; and Bernard, often the smallest kid on the field but a sublime playmaker who invites constant comparison to Messi.

Abbot masterfully weaves together the dramatic story of the boys’ journey with an exploration of the art and science of trying to spot talent at such a young age. As in so many other sports, data analytics in soccer have expanded in the wake of Moneyball, with scouts employing more sophisticated metrics like “expected goals” and tracking data to judge players. But, as The Away Game chronicles, soccer genius depends more on intangible qualities like “game intelligence” than on easily quantifiable ones.

Richly reported and deeply moving, The Away Game is set against the geopolitical backdrop of Qatar’s rise from an impoverished patch of desert to an immensely rich nation determined to buy a place on the international stage. It is an unforgettable story of the joy and pain these talented African boys experience as they chase their dreams in a dizzying world of rich Arab sheikhs, money-hungry agents, and soccer-mad European fans.

“Engrossing … A masterful account of the drama and science of scouting [and] a lively evocation of football mania in Africa.”
– The Economist

“Masterfully weaves together the stories of boys from a renowned soccer academy in Doha in an illuminating narrative.”
– Sports Illustrated

“If you are to buy one book in 2018, The Away Game is your best chance to experience the very best, the royalty of football literature … It’s easily our favorite read of the year.”
– International Soccer Network

“Follows the fortunes of three young African players who participated in the Qatari [Football Dreams] program and for whom soccer represented a ticket out of poverty … An excellent introduction to this shady world.”
– Foreign Affairs

“[The Away Game] is about soccer, sure. But it’s even more about the corruption, greed, and power that fuels the game.”
– Men’s Journal

“A sobering look at the realities of the pursuit of big-time sporting opportunities.”
– Kirkus (starred review)

“Gripping … An important book to ponder as the world’s favorite game grows ever more global.”
– Booklist

“What a fantastic story: a soccer-themed mix of Hoop Dreams and The Sports Gene, told with surpassing empathy for the boys of Senegal, Ghana, and other African countries involved. Sebastian Abbot knows his soccer, but The Away Game is a tale with universal appeal to anyone who cares about the human condition.”
– Grant Wahl, author of The Beckham Experiment

“An exhilarating, at times heartbreaking, and ultimately unforgettable journey that lays bare the true human stakes of the world’s most popular game.”
– Warren St. John, author of Outcasts United

“Whether you’re a soccer fan or not, you will find everything you could possibly want―joy, heartbreak, inspiration―between these covers. The Away Game is a story of global ambition, of poverty, of passion, and of the beauty of the beautiful game. You will learn about the art of identifying future superstars, but most of all you will be taken on an unforgettable journey with an unforgettable group of boys.”
– Jonathan Mahler, author of Ladies and Gentlemen, the Bronx Is Burning

“Every fan of international soccer must read The Away Game. It shows how soccer stars are made, and it captures the desperation and the pain behind African footballers’ search for fame and money in the Middle East and Europe.”
– Helon Habila, author of Oil on Water and The Chibok Girls